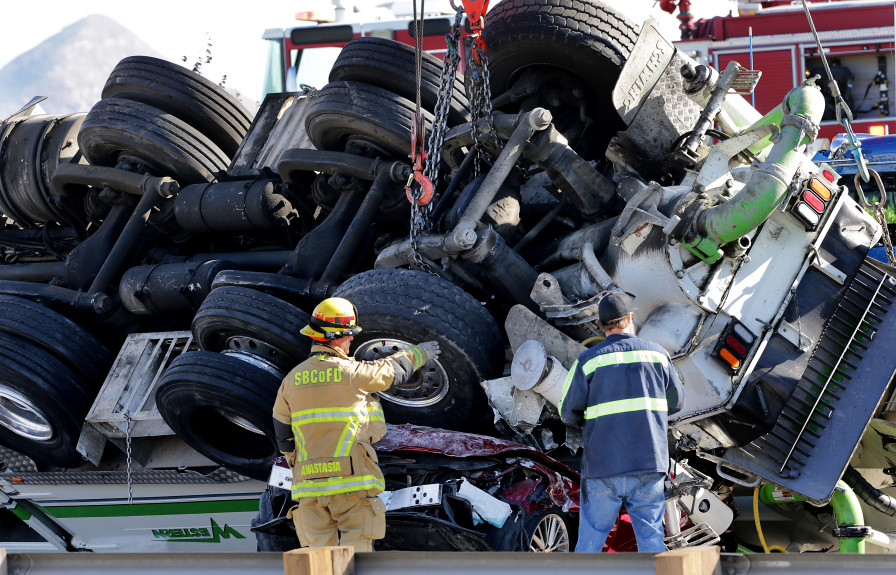 A fiery crash involving a big-rig and several other vehicles killed at least five people early Friday afternoon in Rialto, leaving both directions of the 10 Freeway closed for hours, according to the California Highway Patrol. The big rig was traveling westbound on the 10 shortly before 1 p.m. when, for an unknown reason, it veered toward the median, crashed through the guardrail and burst into flames near the Riverside Avenue exit, according to CHP Officer Brian Alvarez.

The massive vehicle, apparently a concrete pump truck, continued to travel across all eastbound lanes, striking multiple other vehicles, he said.

At least five people were killed in the chain-reaction crash, according to CHP.  An unknown number of vehicles caught fire, Alvarez said.

CHP Officer Steve Carapia told KTLA five vehicles were involved, including a motorcycle. The agency's incident log initially indicated the total number of vehicles could be up to eight.

The crash site spanned all lanes of the eastbound 10, with the big rig overturned and a dump truck on a grassy area on the side of the roadway. Two cars appeared to be totaled, Sky5 aerial video over the scene showed.

First responders are still searching the scene for possible additional victims, according to Carapia.

Around 1:40 p.m., CHP indicated the eastbound lanes would be closed for eight to 10 hours, while westbound lanes were expected to be shut down for three hours.

Traffic was backed up for several miles in both directions shortly as of 3 p.m., the aerial footage showed.