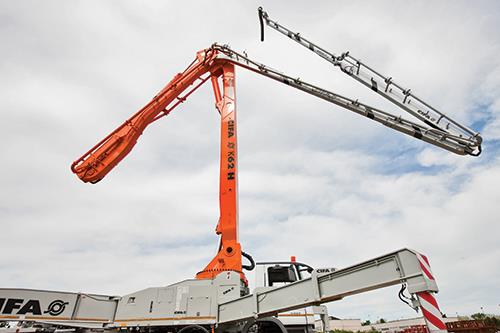 As the use of composites has expanded over the past 70 years, one of their many benefits has consistently driven innovation: Composites enable manufacturers to design and build parts with the strength and stiffness of conventional materials but at significantly reduced weight. Such efforts have captured the “low-hanging fruit,” to much applause, in huge markets — aerospace, boatbuilding and wind energy come to mind. No less important, however, are efforts by pioneers in niche applications that demonstrate, with little fanfare, the unlimited potential of the technology.
Prime examples are Italian construction equipment manufacturer Centro Italiano Forniture Alberghiere Srl (CIFA, Lomazzo) and composites fabricator RIBA Composites Srl (Faenza). To- gether they have developed carbon fiber composite booms for concrete-pumping machines. In full commercial production since 2011, the booms can be made in a variety of lengths.

Cascading savings
Mounted on trucks or trailers, concrete-pumping systems typically are fitted with articulating arms made of steel, which support the steel tubing through which concrete is pumped. Depending on site accessibility and the height of the concrete pour, the arm’s end might extend hundreds of feet from the pump location. The greater the distance, the greater the moment of downward force that acts on the arm and must be counter-balanced at the truck or trailer.
RIBA’s carbon fiber booms replace the outermost segments of the arm where that force is greatest (see photo, at left) and realize section weight savings on the order of 25%. This opens the way to other benefits that justify the nominally higher cost of the carbon fiber. “The reduced weight means a smaller counterweight is needed,” says Andrea Bedeschi, RIBA’s general manager. In turn, the arm can be operated with smaller hydraulic cylinders and the entire system can be carried by a smaller, lighter truck or trailer, reducing initial investment and improving fuel economy. Additionally, a carbon boom extends the work length of the arm by as much as 20%. Finally, because scrutiny of and restrictions on truck weight are increasing, operators with oversized loads can face expensive surcharge levies or, in some countries, find themselves banned from roads. The lure of these potential benefits was the motivation for tackling the challenge of designing, making and selling a completely new part for an entirely new application.