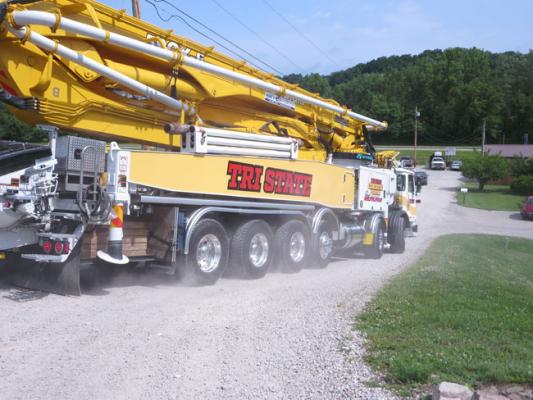 Tri State Concrete Pumping out of Belpre, Ohio, runs a 20-unit fleet ranging from compact trailer-mounted concrete pumps to a giant multi-axle Class 8 truck weighing 52.5 tons. Greg Windland, who runs the outfit, says the business requires him to work long hours, and he expects the trucks and their operators to do the same. And when some recently purchased trucks began falling down on the job, he went to another truck brand: Autocar.

The oldest automotive nameplate in North America, dating to 1897, Autocar built its first truck in 1899; it underwent a gradual transformation from a pioneer car and motor-truck builder to a specialty brand, owned through the years by White Motor and then Volvo Trucks, and now to semi-independent status. It’s a property of GVW Group of suburban Chicago, and mostly makes low-cab-forward refuse-collection vehicles in Hagerstown, Indiana, and Birmingham, Alabama. The heavier of those, the ACX Xpeditor, uses a large steel cab descended from the old White Xpeditor.

That cab is also employed in the ACX severe-duty concrete-pump chassis, and its roominess appeals to Windland and his drivers, who have been accustomed to the more limiting confines of the venerable Mack MR cab. Two late-model Mack Granite conventionals have more modern accommodations. But, like the MRs, their diesel particulate filters are subject to frequent regenerations, perhaps because of the intermittent rather than steady operation of their engines: Lots of heat is needed to properly burn ash out of the DPFs, and if heat is lacking, fuel-fed regens are necessary. Yet the Cummins diesels and aftertreatment equipment in Windland’s three Autocars have so far proven reliable.

Our subject truck has a Cummins ISX12, an older series product since superseded by the lighter (by about 600 pounds) X12, which will be in a Tri State chassis now on order. Older technology notwithstanding, the ISX12 hasn’t missed a beat. Bought with a 450-horsepower rating, it was locally up-rated to 500 horses with Cummins’ assistance. The extra power helps with propulsion in a truck that weighs 104,000 pounds just sitting still; it travels under permits issued by the states in which Tri State operates—mostly portions of Ohio, West Virginia, and Kentucky. The engine runs through a 6-speed Allison automatic. “With the labor market being what it is, this helps in hiring,” Windland says, because most young people have never driven a manual transmission of any kind, much less the non-synchronized multi-speed gearboxes now in many of Tri State’s trucks.

The Allison made the truck rather easy for me to drive in spite of its mass and bulk. It’s about 48 feet long, 13 feet, 2 inches high, and 102.3 inches wide, so at first it took a little concentration to keep it within the lanes of U.S. 50, which runs east and west through southern Ohio. Along for my demonstration ride was Steve Gilliland, Tri State’s shop foreman, who drove the hefty vehicle out to the highway where I took over. He directed me west about 10 miles to a small truck stop where I turned around and returned to the four-lane U.S. 50, which is a limited-access highway in places, and back toward the company’s headquarters and yard. On the open road, the truck’s ride was something like a motor coach’s, with gentle vertical movements over the twin-steer axles’ suspension and, thanks to air-ride over the tridem rears, virtually shock-free.

At 60 to 65 mph, the tach needle pointed to about 1,700 rpm, where the engine could produce the power and torque needed to climb moderate hills rather easily. The engine brake helped keep speed in check on downgrades. Although fine on the highway, the Autocar could use a deeper low gear to handle stiff hills in West Virginia, Gilliland said. A 7-speed Allison 4700 would probably solve this, but it’s not practical to retrofit this into an existing truck, said Adam Burck, Autocar’s marketing manager.

“We’re on a learning curve,” Windland said. “This is only our second automatic. We’re gathering experience now that may well tailor what we order in the future.”

The big cab felt spacious, even with a wide doghouse over the engine. Helping was a huge two-piece windshield with glass curved back at the sides. Large side, corner, and back windows enhanced side- and rearward vision so I could see what was going on almost everywhere around the cab.

That’s especially helpful while maneuvering through city streets and onto and out of a job site. Main gauges—speedometer, tachometer, engine-condition, and other information—were directly in front of me, readily visible over the hub of the steering wheel, which tilted and telescoped to suit me and any other driver. The wheel’s diameter was small, at only 18 inches, which added to thigh and belly room. Turning corners required some planning because the wheel must be spun several rotations from center. I found that I had to begin steering early into a turn, and help it return to center after a turn. This is common in trucks with a single 20,000-pound-capacity steer axle, and this Autocar had two of them.

Most controls were readily at hand, with the exception of headlight switches, which were at the center of the cab near the windshield. Autocar put them there so they can be reached from a left- or right-side driver’s position: necessary when this cab sits on a trash-collection chassis with dual operating controls. Gilliland and his co-workers understood that, even though they didn’t like to stretch to reach those switches. They can be mounted further to the left, answered Burck, who was on site to facilitate my visit. Switch placement is among many details that can be specified at ordering time. Autocar’s engineers and line workers commonly deal with many such requests and customization is simply part of what they do.

The ACX’s six-axle chassis has tall frame rails and 10 cross members to stay rigid while traveling on pavement, but flex slightly over uneven ground while carrying the heavy concrete pump body, an Everdigm with a 59-meter-long boom and the capacity to move up to 210 cubic yards an hour. Aside from the strong hydraulic pumping equipment and 5-inch inside-diameter double-wall steel piping that places concrete over long distances, the body includes four massive outriggers that level and stabilize the truck while it works on a job site. Outrigger pads rest on stout cribbing carried in alcoves along the body’s sides so the pads don’t sink into dirt. This South Korea-made Everdigm is the second that Tri State has bought; they are somewhat lower-cost alternatives to the Putzmeister pump bodies that are in other trucks. So far the Everdigms are working well, but Windland said he still favors Putzmeister over all.

And while he’s pleased with the Autocars, he hasn’t ruled out buying more Macks. “It was hard changing the habit of being all Mack,” he said. “We know them, we’re geared toward them with parts, with servicing. But going outside that comfort area was something we had to do.”