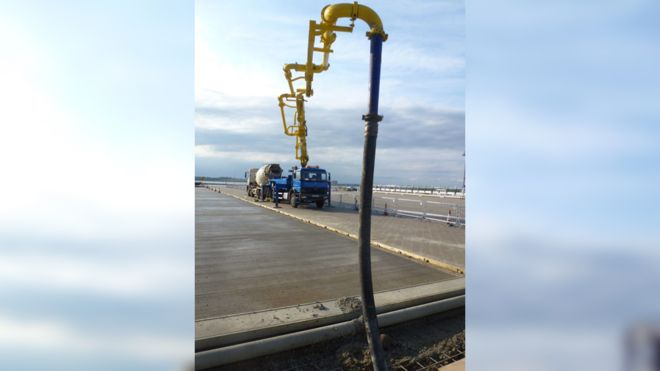 A company has been fined £15,000 after a worker died when he was struck by a hose which is used to pump concrete.

Garry Louis, 58, was working on an upgrade to a terminal at the Port of Felixstowe in 2015 when the hose violently whipped round and killed him.

The Health and Safety Executive (HSE) said RW Hill, of Grays, Essex, failed to enforce a safe exclusion zone around the hose.

RW Hill was the main contractor on the project and had sub-contracted two specialist companies to pump the concrete and lay the concrete at the container port in Suffolk.

On 7 August 2015, a flexible delivery hose through which concrete was being pumped became momentarily blocked, the HSE said.

The hose then cleared under pressure, causing it to violently whip round.

Mr Louis, a concrete-laying sub-contractor, was killed and another worker suffered cuts and bruising.

An investigation by the HSE found RW Hill had failed to effectively plan and manage the safe pumping of concrete, and an exclusion zone around the flexible delivery hose was not enforced.

The company did not adequately supervise, instruct, or provide suitable information to sub-contractors, and failed to monitor the pumping operations.