THE HISTORY was written by American Standard Concrete Pumping.

The first big rock (1inch rock) concrete pump was a primitive pump designed by George Macarr. Macarr designed and built this pump in his garage in the San Fernando Valley, California. At this time Duane O. Perrin owned and operated a ready mix truck. Perrin first met Macarr in March 1964 when Macarr had called for delivery of two yards of ready mix concrete to be delivered to an open field near his home for a test pour that he was conducting on his newly designed concrete pump. Perrin delivered the ready mix into the pump’s aluminum hopper. The pump was designed to use four rubber plug valves to accept the concrete from the hopper and distribute it to the outlet port. Macarr had just redesigned the valves by baking them in his kitchen oven. The belief was that the hardened rubber noses would not harm or separate the concrete as they opened and closed under pressure. The concrete pumping system he used was four-inch fire hose. Unfortunately for Macarr and Perrin, the curious ready mix driver, the concrete only moved three to four feet down the fire hose line before it plugged. After several hours of trying and retrying and cleaning out the plugs, it was determined by the two that the pump would pump the concrete but it would not flow properly through the fire hose. By that time the concrete was starting to set and the test pour was concluded for the day. After everything was cleaned up and washed out, Macarr said to Perrin “Duane if I can get this pump to pump concrete successfully, I have a deal with Case Equipment Company to buy my designs and patents, and in turn they will manufacture the pump for distribution. I need a guy like you, one who is a hardworking and who also owns a ready mix truck to help me develop the design through more testing- will you help me”. Perrin agreed and suggested that they try to pump thru 4-inch oil transfer hose. Perrin obtained some of the oil transfer hose from the Long Beach shipyard. They set up a hundred feet of line and changed the mix design to a 50% sand and 50% grade rock with 6 sacks of cement and added water to make it an 8-inch slump. Fortunately for the two pioneers, the new configuration was successful and that Case Equipment bought the design. 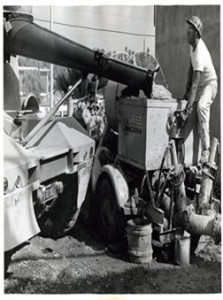 One of the very first Case-Macarr trailer mounted concrete pump.

It was an exciting time as the Company faced many unknowns and challenges. The pioneers forged ahead with this new invention and changed the construction industry forever. They had to invent, reinvent, improvise and discover through trial and error every aspect of the pumps capabilities, usage and the system needed to deliver the concrete to the forms.

They had discovered that pipe was the best for pumping and used rubber hose on the end for distribution. Goodall Rubber and Goodyear Rubber Company were instrumental in assisting Perrin in the development of a hose product that could withstand the friction and the pressure exerted on the concrete delivery line. In the beginning Perrin developed a serrated pipe insert which was pushed into the end of the hose and banded together with several stainless steel bands. Steel elbows were bent to different degrees with Victaulic grooved ends welded on the ends to connect the pipes, hoses and elbows together. This system was flawed as it would blow apart from time to time. In the beginning many ready mix companies refused to deliver mix to jobs that were using pumps and even went so far as to impose a surcharge on the contractor to deliver concrete to the project. At that time, most contractors used concrete pumps as a last resort. Cranes and Georgia buggies continued to be the placement method of choice. Then there was concrete mix design experimentation- Perrin and Erwin thought that in order to pump concrete successfully, you had to add lots of water and sand to the concrete mix and have at least 6 sacs of cement. Engineers did not think this was a desirable mix design and most often they rejected its usage. Then one day in 1965 Ken Erwin stopped by the Anaheim Baseball Park being built by Del Webb Development. The brave superintendent said to Erwin “If you guys can get the concrete up to those columns, (which were over three hundred feet away from the closest delivery point) American Standard could have the job and pump every day for the next year.” The concrete was a Class A 5000 psi concrete with over 1700 lbs of rock and 7 sacs of cement. The duo knew that it was going to be all but impossible. But with their pioneer spirit they gave it their best shot. They set up 300 feet of line made a 180 pipe hook at the end of a pipe, put the hook into the column and to their amazement the concrete pumped like butter. This success put American Standard Concrete Pumping on the map. American Standard pumped several thousand yards of concrete at the Anaheim Baseball Park. This also drastically changed their position on what was a pumpable mix design. They discovered that cement was the key lubricant not sand and water.

At the end of the Anaheim job, Dell Webb offered them a chance to pump on they’re in progress high-rise job – the #1 Wilshire Building down town Los Angeles. This would be the first high-rise ever pumped. Since the building had already started; they set up next to the elevator-cable bucket and buggy shaft and started pumping. To every one’s amazement American Standard Concrete Pumping and their Case-Macarr pumps out-performed the elevator–cable bucket and Georgia-buggy system. 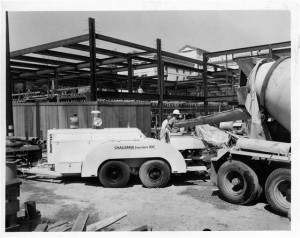 The “King-Krete 100” that Perrin designed.

In 1968, not being happy with the design and performance of the concrete pumps in existence at the time, Perrin set out to develop a better pump. He and his staff designed and assembled a proto-type pump which they named “King-Krete”. Not having the resources to go into full production the manufacturing rights were sold to Challenge-Cook Bros. in 1969 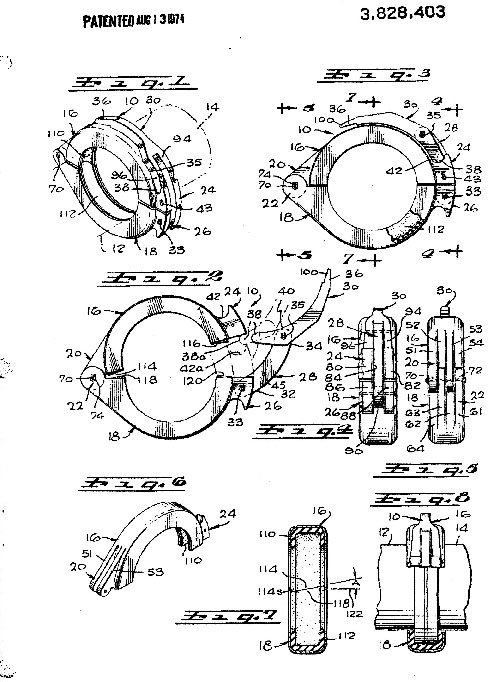 One of the biggest problems in the early days of concrete pumping was the placement line clamping system (the Victaulic /grooved end system) would blow apart under the pumping pressures. In the early seventies, Perrin was concerned about the safety of the Victaulic clamping system as the industry was moving concrete out further and up higher distances, creating higher line pressures. He began experimenting with coupling designs. Ultimately he designed, developed and began manufacturing the “Raised End Heavy-Duty” clamp and gasket system. Perrin was issued a U.S. patent on his clamp and gasket. This system and variations have become standard throughout the world. In addition, it has been successfully adapted to the metric system and is still being used today on every truck mounted concrete boom pump manufactured in the world. Another major hurdle was the 500-foot high cooling tower job in Huntsville, Alabama. The job had been using the scaffold and Georgia-buggy placement method when an overloaded scaffold flipped over dumping the concrete filled Georgia-buggies hundreds of feet to the ground and many labors to their deaths. Research Cantrell brought in Perrin to design a safe method of placing the concrete into the 500-foot cooling towers. Perrin designed a dump valve system that allowed the continuous flow of concrete to all sides of each tower while maintaining an even level of concrete distribution inside the form. Perrin’s design was then used on the majority of the cooling towers across America during the 1980’s 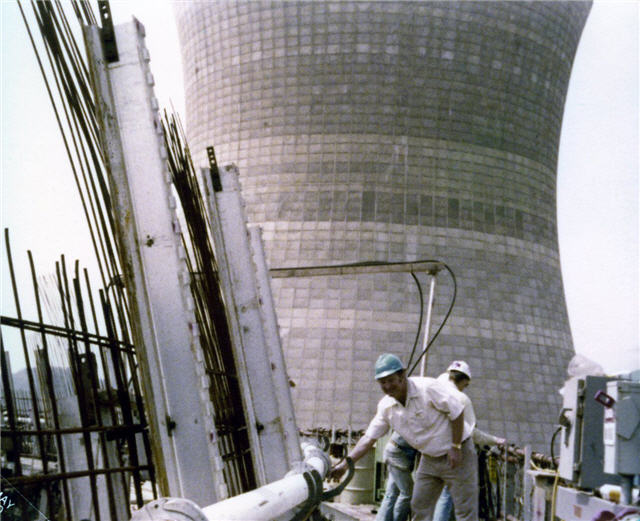 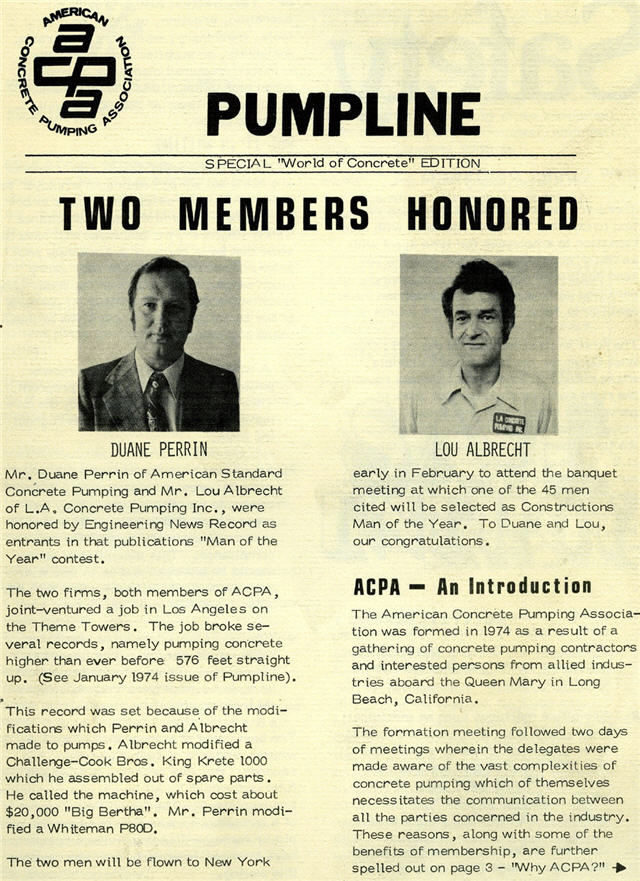 By the mid 70’s Duane Perrin and American Standard had earned a reputation as one of the premier concrete pumping companies in the world with operations in many of the Western States. In addition, Perrin operated one of the largest distributorships of concrete pumping equipment and accessories in the United States. His reputation was highlighted on February 19, 1975 when Perrin was a nominee for the “Man Of The Year Award” by the Engineering News Record magazine. Perrin was flown to New York to attend a banquet honoring the Construction Man of the Year nominees. This nomination was the result of a World Record for pumping height. American Standard Concrete Pumping successfully pumped up to 576 feet on each of the Century City Twin Towers in Los Angeles, California. The pumps Perrin used on this project were a Whiteman P80D which he had modified to adapt to the job requirements and a King-Crete which he had designed in 1968. In 1975 a Project Manager from Pacific Construction sought out this reputation. The Job was a high profile twin 42-story high-rise called “The Discovery Bay Towers” on Oahu, Hawaii. Perrin was hired as the pumping consultant and implemented one trailer mounted Pump-it concrete pump, one Schwing 23 meter placing boom, and the Heavy-duty Raised End pipeline system. The Discovery Bay job was the tallest high-rise built to date using a pump and placing boom combination. 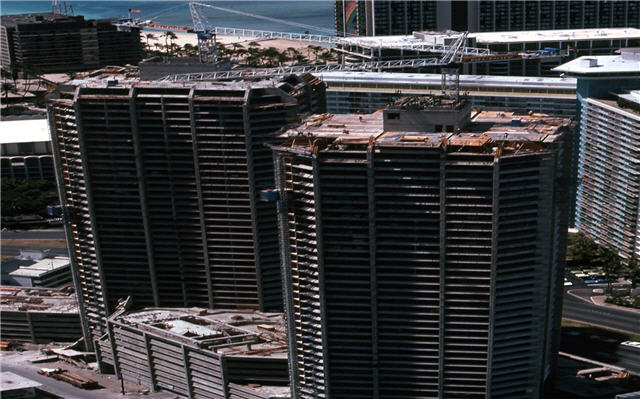 Through out the 1970’s and early 80’s Perrin continued to provide consulting, equipment sale, parts, service and financing to the pumping industry in Hawaii. Then in 1984 he was faced with the down turn of the Hawaiian economy and the foreclosure recovery of a hand full of concrete pumps from an unfortunate pumping company. At this time two young and eager employees of a closing concrete pumping company wanted a shot at running the equipment. Rather than shipping the pumps back to the mainland, Perrin decided to split the fleet into two parts. As a result of this division, two concrete pumping companies were formed- American Standard Concrete Pumping Hawaii under Raul Ponce and Terry’s Grout Pump Service under Terry Kelso. In 1992, Gregory Perrin replaced Raul Ponce as Operations Manager of the Hawaiian Division. As a second generation concrete pumper, Gregory came to American Standard Hawaii with a BS degree from USC in International Marketing and Finance and a lifetime of concrete pumping history and experience. His temporary assignment was to hire and train a new operations manager, salesman, evaluate and train its operators, recondition the equipment, and return the division back to American Standard’s high standards. Once completed, Greg was to return to American Standard’s head office to continue assisting in the management and development of corporate operations.

At this time, Benjamin Fernandez was promoted from concrete pump operator to sales and service manager. The addition of Fernandez to the management team has been instrumental in the growth of the largest and most successful concrete pumping company in Hawaii’s history. Fernanadez’s career began in 1976 as a pump operator for Carlos’ Grout Pump Service. To our knowledge Fernandez and his 31 years of continuous pumping experience makes him the most experience Hawaiian native concrete pumper in the world. Something we at American Standard are very proud of. In 1994 American Standard signed a bargaining agreement with the Local 3 Operating Engineers Union. Around this time the division was well organized and running very smoothly. The division was gaining market share against Terry’s Grout Pump Service and the future was looking bright. Unfortunately for Corporate Operations, Greg had no desire to leave Hawaii and return to California. An agreement of sale was reached and the division was sold to Greg Perrin.