Making life easier for the laborer. It is this simple principle that inspired the beginnings of a small company in 1958 that would grow into what is today an over one billion dollar global organization. Celebrating 50 years of excellence, the Putzmeister Group is known and respected worldwide for quality and durability as well as pioneering technological innovation in the concrete placing industry.

The Start of Something Big 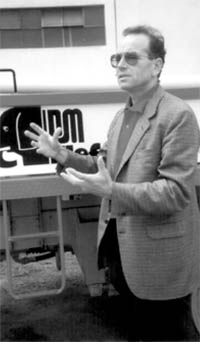 While he was destined to help revolutionize the concrete and material placement industry, Schlecht’s humble beginnings in Filderstadt would be the basis for his future success. Schlecht’s experience in his father’s plastering business provided the incentive for him to develop a way to ease the physically demanding work of a plasterer. His first plastering prototype was developed in 1958 as part of his engineering thesis at Stuttgart University. He named his company KS-Maschinenbau.

By 1959, Schlecht had refined his design and in 1961 he had outgrown the village smithy where his machines were made. It was at this time that he moved to a small factory he called Putzmeister-Werk. The name “Putzmeister” was chosen to represent “plaster master.” 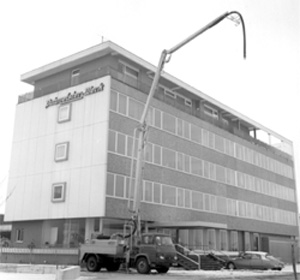 During the 1960s and 1970s, Putzmeister opened branches and additional manufacturing facilities in Germany and throughout Europe to accommodate its technology-based growth.

The company revolutionized the plastering technique in 1965 with the manufacture of Gypsomat, the first automatic and continuously working plaster machine in the world for gypsum plaster. Then, in 1966, Putzmeister introduced its first series of Mixokret floorscreed pumps. Production of PM concrete pumps with 2-meter stroke commenced in 1968. These innovations were complemented by world record-setting concrete pumping heights and distances, including 1,115 feet (340m) high over a total distance of 1,969 feet (600m) in the St. Gotthard Tunnel (Switzerland) in 1978.

After initially exploring penetration of the North American market in the 1970s through a relationship with crane giant, American Pecco of New York, the Putzmeister organization entered the region full force in 1982 with the acquisition of Thomsen, Inc.

The nation’s top boom pump manufacturer at the time, Thomsen had roots in the mortar machine business that closely mirrored Putzmeister’s own. Synergies between the two companies expanded, as Thomsen’s dealer network enhanced distribution of Putzmeister equipment and the two brands merged under the Putzmeister name.

Located in Gardena, California, the company continued production of Thomsen’s well-known and respected Thom-Katt® trailer pumps, mortar machines and Tommy Gun® plastering machines as well as Putzmeister truck-mounted concrete boom pumps and other products. In addition, the growing organization was given sales and distribution responsibilities for the German division’s industrial pumps and tunneling machines in North America.

In 1993, customer demand and increasing market opportunities led Putzmeister east to establish a larger facility for its North American headquarters. Selected for its centralized Midwest location and close proximity to suppliers, the Southeastern Wisconsin village of Sturtevant also boasted an exceptional work ethic similar to the parent company’s locations in Germany.

Recognizing that its expertise in the placement of concrete could have strategic benefits in the placement of other materials, Putzmeister acquired a truck-mounted telescopic belt conveyor line from Rotec Industries in 1997. Originally called Super Swingers, this brand was renamed and registered as “Telebelt®”. To accommodate production, a new 36,000-square foot manufacturing building was added at the Sturtevant location in 1998. Success with Telebelt sales led to the acquisition of another complementary line – Clark Industries’ truck-mounted 50-foot and portable/towable conveyors.

Driven by a pioneering spirit and an unending desire to exceed customer expectations for high-performance products that complete jobs more efficiently, Putzmeister introduced the world’s largest truck-mounted concrete boom pump, the 63Z-Meter at the 2005 ConExpo/ConAGG trade show. Just one example of the company’s long line of industry innovations, the 63Z-Meter further solidified Putzmeister’s position on the leading edge of the concrete and material placing business.

On July 2, 2007, Putzmeister completed its acquisition of Allentown Equipment, a leading manufacturer of wet- and dry-process shotcrete equipment for over 95 years. The company was renamed Allentown Shotcrete Technology, Inc., A Putzmeister Company and has begun the process of integrating its product line with Putzmeister’s to serve the refractory, underground, civil and mortar industries.

Reaching for the Future

The Putzmeister Organization today employs approximately 3,200 people across the globe, nearly 500 of which work for Putzmeister America. The dramatic growth of the company is a result of a passionate commitment to making labor easier through innovation. This commitment is seen every day at Putzmeister’s global headquarters in Aichtal, Germany, its additional German manufacturing facility in Grundau and in its 16 international manufacturing and sales divisions. The people processes and drive to be the best demonstrated at Putzmeister continue to set new benchmarks for performance, quality, reliability and customer satisfaction.

Putzmeister America kicked off the 50th anniversary celebrations for the global organization during the World of Concrete in January. Show Director Tom Cindric presented Putzmeister America President and CEO, Dave Adams with a gift commemorating this significant milestone.

In May 2008, Putzmeister will hold an International Meeting in Aichtal, Germany to officially mark the organization’s half-century in business. Putzmeister has developed a commemorative logo, which will be featured throughout the year on the company’s marketing and communication materials. 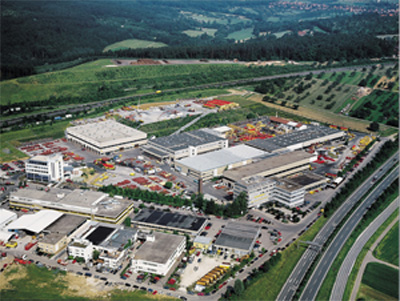 Construction of the first section of Factory I in Filderstadt - near Stuttgart Airport.

Manufacture of Gypsomat, the first automatic and continously working plaster machine in the world for gypsum plaster, revolutionising the plastering technique.

In 1969 we already started to make leaflets for our concrete pump customers, as shown in this leaflet PUMPBETON. Brochure 'Concrete Pump' from 1969

20,000th plastering machine sold. All branch offices in their own premises.

Development of the P 11 worm pump with variable output and fully hydraulic drive.

World record: concrete pumped to a height of 340 m over a total distance of 600 m in the St. Gotthard Tunnel (Switzerland).

Delivery of the largest concrete pump in the world, almost 50 m boom height with 150 m³/h output capacity. The company Thomsen (US) taken over as "Putzmeister America".

Another pioneer achievement - the "Shotcrete Buffalo". The largest wet shotcrete pump in the world.

Delivery of the largest concrete pump in the world with 62 m boom. PM concrete pumps are the pumps sold the most in the whole world.

Delivery of the 5,000th PM Elephant. Putzmeister concrete pumps with special radiation protection whilst encapsulating Chernobyl reactor. With the introduction of the worm pump S 5 (with plate- or continous mixer) Putzmeister presents its new concept of modular built machine-components.

Joint venture company Putzmeister Japan founded after selling PM equipment in Japan since 1964. Introduction of the MSx - a mixer-pump whitch can be taken apart for indoor- and outdoor plasters.

Foundation of "Putzmeister Racine", second branch in the US.

Putzmeister Mörtelmaschinen is becoming an independent sector in the new Putzmeister-building.

Putzmeister is turning to a joint-stock company. New world record: 2015m pumping distance in Le Refrain / France. Skywash service-robots in service with Lufthansa for outside cleaning of jumbo planes. The MP 25 takes the place of the successful MSx and sets new standards with manageability and mixing-quality.

Putzmeister Japan moves into new premises in the north of Tokyo. The founder of the company - Dipl.-Ing. Karl Schlecht retires from the operative business and becomes chairman of the supervisory Board.

Putzmeister America, Brasil and Spain are enlarging there production capacities, resp. constructing new buidlings. PM systems engineering constructs the KOS 25100, a piston pump for the dredging of lakes and rivers with an output up to 250 m³/h. Delivery of the 1000th Pumi, truckmixer concrete pump.

Construction of the pump storage unit Goldisthal in Thuringia. Most different tunnel concreting and spraying equipment as well as Telebelt in operation. All stationary concrete pumps are available in a super sound-proof version for the use in city centres. In Japain, 3 mammoth double piston pumps type KOS 25200 with output rates up to 500 m³/h are in use at extraction of land.

Presentation of the new M 46 with diagonal substructure TRDI and the new 4 section arm for more flexibility on construction sites. Development of the Ergonic Boom Control (EBC). The pump driver controls now all boom movements with just one joy stick. The new M 36 with Z-folding is introduced on Bauma 2001 in Munich.

Introduction of the M 58 on substructure TRDV 250 mounted on a 6-axle-chassis for the US market. Development of the MX 39 stationary placing boom without counterweight for deployment in a land recovery project in Japan, likewise an MX 38 without counterweight. Further development of the trailer concrete pump BSA 1002 Multi as an all-round machine for delivering concrete and for synchronised wet concrete spraying.

Successful market launch of the BSA 702, a machine for delivering fine-grained concrete, self-levelling screed and for wet spray jobs. Further development of the EOC (Ergonic Output Control) for concrete pumps. Co-operation with the Swiss group SIKA AG and re-development of the former Wetkret WKM now SIKA-PM 500 as a tunnel spray machine. Development of the Autocor (Automatic Concrete placing on Rail) machine for pre-fabricated jobs. Introduction of the new worm pump SP 11 Beliso. The high-pressure pump HSP 25.100 was re-developed for use in the mining sector.

Introduction of further elements in control systems such as the EPS (Ergonic Pump System) and the core pump HLS, a large-volume double-piston pump with a delivery cylinder diameter of 250 mm in truck-mounted concrete pumps. Introduction of the 6-sectioned M 62.

Reorganisation of the Putzmeister AG into 4 business areas Concrete Technology (PCT), Moratr Technology (PMT), Water Technology (PWT) and Industry Technology (PIT). PM gets the order to deliver machines, placing booms and delivery pipelines for the Burj Dubai. For this a new super high pressure pump BSA 14000 SHPD for concrete pressure over 300 bars has to be developed. Introduction of the M 20-4 and the M 42-5. Continued development of the tried and tested Telebelt TB 105 in a new TB 110. Introduction of a PUMI 31.89 S, a PUMI with a placing boom of 31m. Development of the Triplex pump of the conveying of mineral raw materials.

Relocation of the growing Putzmeister Russia into larger premises in the north of Moscow. Foundation of the new representation office in Dubai. Acquisition of Strobl Beschichtungstechnik GmbH in Biberach, Germany as an addition to the product program with all products to cover the specific requirements of the painting and decorating trade. Additional product developments such as hot water high pressure trailers for up to 2,800 bar and aggregates up to 250 HP were launched. Putzmeister acquires delivery line manufacturer Esser.

Putzmeister AG gained the Bauma Innovation Award 2007 of the German construction industry in 2 categories. Putzmeister-founder Karl Schlecht was awarded with the Karlsruhe Innovation Award of the "Institute for Technology and Management in Construction". Acquisition of Allentown Equipment, a manufacturer of wet and dry process Shotcrete equipment for the refractory, pool, underground, repair and new construction industries, situated in Allentown PA, USA.